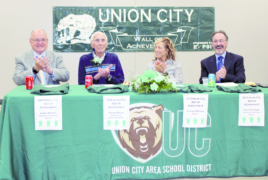 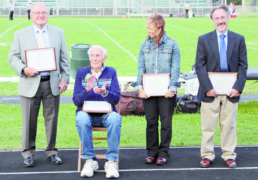 The Union City Wall of Achievement class of 2019 inductees were recognized and presented with plaques prior to UC's Homecoming football game on Friday night. The newest inductees, from left, are Baxter Wellmon, Richard "Dick" Mason, Dr. Susan Maloney and Daniel Brumagin.

The latest Wall of Achievement inductees were also honored during a reception in the Union City Area Middle-High School cafeteria before the football game. Sitting at the inductees' table, from left, are Baxter Wellmon, Richard "Dick" Mason, Dr. Susan Maloney and Daniel Brumagin.

Photos and article Courtesy of The Corry Journal

UNION CITY - There are now 66 members of the Union City Wall of Achievement after the latest induction ceremony was held on Friday, Sept. 13. Four new inductees - Daniel Brumagin, Dr. Susan Maloney, Richard "Dick" Mason and Baxter Wellmon - were welcomed into the Wall of Achievement during an induction ceremony and reception in the Union City Middle-High School cafeteria.

"We are honored to welcome four very deserving candidates as they join the other 62 members of the Union City Wall of Achievement," said Tracy Daggett, president of the Wall of Achievement Committee. "They're prime examples of what Union City has to offer to not only our region but to our youth as well."

The Wall of Achievement was started 12 years ago as a way to promote accomplishments of UC graduates and others with close ties to the community. Each year, a committee accepts nominations from the general public and then chooses three to four inductees from the nominees.
The new inductees' names will be added to a large plaque that hangs in the middle-high school with all past recipients.

"The Wall of Achievement began in 2007 as a vision of Mr. Kurt Anthony, not only to recognize the accomplishments of others, but also to enlighten our community and more importantly, our students - what this town and school district has helped to produce," Daggett said.
Friday's induction ceremony and reception was the most well attended Wall of Achievement event thus far.

The class of 2019 inductees were recognized for their significant accomplishments in the fields of health care, business and community service, according to Daggett. The reception provided an opportunity for members of the public to meet and greet the latest inductees and hear a few words from them. Brumagin spoke about following in the footsteps of his grandfather and his wife's father who were previously inducted into the Wall of Achievement. He also praised Union City for being a great community to raise his children and grandchildren, and thank the committee for honoring him with this award. "I never thought I would be here and I want to thank you all for the award. It was definitely not expected," Brumagin said.

Maloney also discussed how Union City is a great place to grow up and commended the high school for molding her into the person she is today. "As I thought about what my high school days and years meant to me, I can say for certain that I really would not be who I am today and would not have accomplished what I have if it were not for sports and athletics," she said.
Maloney said her coaches and teammates taught her the value of camaraderie and hard work, and she has used those skills throughout her adult life. "I'm still proud of everything that started here in Union City High School," Maloney said.

Mason spoke briefly about his years of service to the Union City area. He talked about how he served 16 years on the UCASD school board, represented the UC school district by serving six years on the IU5 board and he spent 30 years on the UC hospital board. Mason also hailed the nearby Canadohta Lake community because that's where he met his wife, Nancy. Even though he grew up in Spring Creek, Mason and his wife relocated to the UC school district and purchased the Canadohta Roller Rink. "It was in 1961 that we lived by the skating rink and moved here from the Corry area," he said.

Prior to Wellmon's address, his wife Susan read letters of congratulations from their children aloud since they couldn't attend the reception. Wellmon then spoke about being back at the school he attended more than five decades ago. "It truly is a humbling experience to be standing in a high school that you graduated from 55 years ago," he said. Wellmon went on to deliver a moving speech about never forgetting where he came from and how it guided him through life.
"I'm always trying to remember my roots and in return, give back some of the gifts I have received," he said. "I'm very, very proud to say that I'm a graduate of the Union City area school system. Again, my deepest, heartfelt thank you for the honor of being an inductee to the Wall of Achievement in Union City."

Union City Area School District Superintendent Matthew Bennett was a guest speaker for the induction ceremony and he spoke about the school's recent renovations and improvements.
"The school board has committed to our future," Bennett said. "This is a $15 million project. They did this without raising taxes, by being creative ... Union City has a very bright future and it is only getting brighter."

The class of 2019 inductees were then recognized and presented with plaques on the track of Bears Stadium prior to the start of the Homecoming football game on Friday night and sat in a tented area on the home side of the football field to watch the beginning of the contest.
Visit www.unioncitywoa.com for more information about the Wall of Achievement and for full bios of all past inductees.